Please join the Wharton Club of Charlotte for an event that you will not want to miss!  Georgia Dunn Belk will be presenting a talk titled Drinking History.  Belk is the entrepreneur responsible for the creation of Islander Ginger Beer (and yes, we hear that she may be serving samples at the event).

Belk's ancestral lines can be traced back 13 generations first to Bermuda and then the Turks and Caicos. She has developed a presentation detailing how ginger beer was such a significant part of the early settlement and growth of the Western hemisphere. Ginger beer's origins can be traced back to the Caribbean as early as the 16th century. Ginger beer was being produced all throughout the colonies, including at Monticello and Williamsburg.  Part of its rapid growth in the US can be attributed to the fact that ginger beer's alcohol is fermented from sugar cane -- not grain -- and grain was not a commodity in the US until the exploration of the west began in the 1800s.

Belk can trace her family tree back to some of the Caribbean's earliest families, including prominent salt traders. Her Tar Heel lineage is strong as well, with a direct line back to Thomas Hariott, an English mathematician who joined Sir Walter Raleigh on a voyage to Roanoke Island in 1585.  She is also married to William Irwin Belk, who is a descendant of the Belk department store founder.

A very interesting part is her discussion will be 16th Century investment banking. One of her ancestors, along with Sir Walter Raleigh, Queen Elizabeth and some other business people supplied shipping companies to go to America and bring products back. They even paid Shakespeare to write The Tempest! 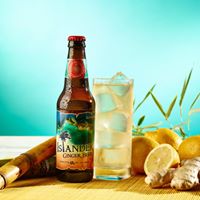